Algeria and Transatlantic Relations is a joint product between the Transatlantic Leadership Network and the Forum des Chefs d’Entreprises (FCE) of Algeria. It engaged respected scholars to produce articles revealing Algeria’s rich history and the history of its ever-growing relationship with the United States.

The Forum des Chefs d’Entreprise (FCE) is an economic organization created in October 2000 by a group of businessmen. Its role is to represent the interest of Algerian companies and act as a partner to the Algerian government. Together, the 4000 members represent 7000 ﬁrms, with more than 400,000 jobs and close to 40 billion USD in revenue. With major Algerian companies among its members, the organization creates new business opportunities for both local and international partners. The FCE’s main goal is to boost and support entrepreneurship and to promote a fruitful dialogue with the government and other actors, such as trade unions and media.

Senior Executive Vice President of the Transatlantic Leadership Network (TLN) Sasha Toperich welcomed attendees to the book launch of Algeria and Transatlantic Relations on January 14 at the U.S. Capitol.

“[This publication] came together as a comprehensive compilation of articles discovering and rediscovering a long, diverse, rich, and turbulent history of Algeria—a country that went through a painful war of independence from the French to a decade of troubles. The Algeria we know today is a young, independent country that enjoys stability with its people, determined not to repeat mistakes of the past. Slowly, the country is opening to foster stronger relationships with many countries, including the United States, overcoming the cliché of predominant French and Russian influence through its shared colonial history and military supply, respectively. In recent years, there has been increased interest from both Algerians and Americans to understand one another, and to build further cooperation. There are plenty of challenges, but there are even more opportunities.” 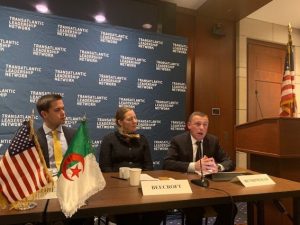 “I invite American companies to focus more on Algeria, which has important investment opportunities. The FCE is willing to actively contribute to strengthening cooperation between the business of our two countries.” Mehdi Bendimerad, Vice President, FCE Algeria 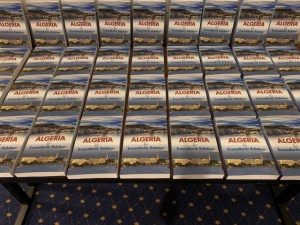 Boukaila asserted that, since its independence on July 5th, 1962, Algeria has suffered from a lack of understanding from the international community, and that Algeria and Transatlantic Relations will be a pivotal work in opening the eyes of Americans to the region. “As an Algerian, I had the opportunity to promote more in-depth communication for Algeria in the United States: its origin, history and its people who are a mosaic of many ethnicities, and lastly Algeria’s aspiration for the region and the world. I believe this is the first of many publications to come as American interest in the region grows, and for Algeria in particular.”

As President of the premier business association dedicated to forging profitable partnerships between the U.S. and Algerian companies, Ismael Chikhoune recounted the ever-improved business ties between the two countries. “American companies have been present in Algeria for several years. However, Algeria as a business destination remains, to say the least, relatively unknown to American investors. The U.S.-Algeria Business Council remains committed to introducing American presence on all stages for increased partnership.”

Pamela Beecroft argued that an economy cannot be built for private sector growth without involving the private sector; that business support organizations are vital in that context; and that CIPE has seen a clear positive trend in Algeria’s overall environment for dialogue between government and businesses on economic reform. 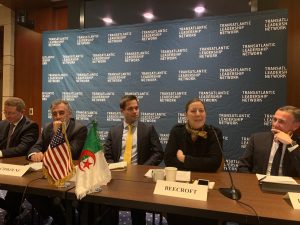 “Transforming the economy requires a whole-of-Algeria approach. The government must work to develop laws and regulations that are robust and provide a supportive framework rather than a bureaucratic labyrinth. The administration must develop a more client-oriented approach that facilitates business. BSOs and their members must seek to continue productive partnerships with decision makers, and work to become increasingly professional, active and responsive to their members. Businesses themselves must focus on ensuring they are well governed and in compliance with relevant laws, acts, and conventions. I would like to close by noting that Algeria is unique, but it is certainly not alone. CIPE has seen other countries successfully achieve similar transformations. Algeria, which is so big, has so many resources and so many incredibly qualified people, has every chance of succeeding.”

Mehdi Bendimerad reassured the American business community that Algeria’s business climate is making major progress and is in a continuous process of improvement. “The Algerian economy unquestionably presents itself as one of the most dynamic and profitable markets in the region. It is no longer acceptable that trade between Algeria and the U.S. remains at its current level is so little diversified. As I have said during my various trips to the U.S., Algeria wants to establish exceptional economic relations and a future with the United States. Important opportunities exist in various sectors besides hydrocarbons, such as mines, renewable energy, medicines, agriculture, and agribusiness. American expertise in the fields of biotechnology, digital economy, and the automotive industry are of interest to us.

Abdelkader Bouazghi, Algeria’s Minister of Agriculture, addressed the audience after the panel, stressing the importance of strong relations between the United States and Algeria.

“His Excellency President of the Republic Abdelaziz Bouteflika was elected to make Algeria a land of peace. The results are here,” Bouazghi stated. “The human development index ranks Algeria as first in Africa. A strong relationship with the U.S. has aided this. The greatest way to reinforce cooperation between the United States and Algeria dwells in economic cooperation, notably that of the agriculture industry. Our friends in the United States have the expertise and the know-how that will benefit Algeria’s future development.” (translated)

Ali Haddad, President of the Forum des Chefs d’Entreprises and Founder and CEO of Groupe ETRHB Haddad, delivered the closing remarks. He praised the authors of Algeria and Transatlantic Relations for creating a “window of objective knowledge of the past, allowing us to project ourselves into Algeria’s future.” Haddad also noted Algeria’s success in recent decades: “In the 1990s, Algeria experienced one of the most deadly and destructive post-independence tragedies. A terrorism of a murderous fury not previously observed has attacked the country, indiscriminately killing tens of thousands of Algerians and foreign citizens and destroying with incredible diligence its socioeconomic foundations. Thanks to an unprecedented process of national reconciliation, led by His Excellency the President of the Republic, Abdelaziz Bouteflika, Algeria has restored its security and been able to relaunch its development process. It now enjoys recognized political and security stability in the region and plays a key role in the resolution of regional conflicts and the fight against terrorism.” (translated)

Haddad concluded by celebrating the Algerian-American partnership: It is in this spirit of friendship and partnership that our relations continue to grow and consolidate in the political, economic, cultural and anti-terrorist fields. In recent years, there has been a new dynamic of partnership between companies in both countries. Business communities are getting closer and exchanging. More and more Algerians are going to the United States and English language learning is developing significantly. Algeria is undergoing a linguistic transformation. The economic policy pursued by President Abdelaziz Bouteflika has made it possible to create favorable conditions for the development and expansion of this cooperation.